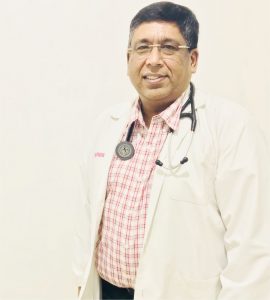 While in Guwahati ,was the sole cardiologist, looking after the armed forces personel, both serving and retired and their dependents in the entire  seven states of North East

Implanted the first AICD and first biventricular pacemaker in the   north east.

While in the Army Medical Corps was Doing approx 300 PCI per year. Started the Primary Angioplasty programme for Acute MI in both base hospital Delhi and Command Hospital Chandimandir. Regularly doing device management for Heart Failure with CRT , AICD and CRT-D. Since the last ten years actively doing paediatric cases with device closures for ASD, PDA and VSD.

Worked on a multicentre project for Stem cell therapy for post MI patients, Participated in Numerous international and National Trials like CREATE and   OASIS.

Was on the panel as Cardiologist to the president of India.

Since Aug 2015 at the Rotary Heart Care Centre.

Actively providing 24 by 7 tertiary cardiac care to the denizens of this area. State of the art treatment for acute myocardial infarction in the form of primary angioplasty and stenting being done routinely and at all hours.  Success rates are equivalent to the best centres nationally and internationally. Besides this routine cardiology consultations , all non invasive investigations, like echo, tmt, holter, stress echos being done.

Thoughts from the doctors

The vision of Rotary Ambala Cancer and General Hospital is to provide services in the area where patients do not have enough time to reach Chandigarh or means to spend the money required for the treatment.
In line with our vision recently we started Neuro-Intervention (Brain Stroke Management) at our hospital by replacing our old Cath-Lab with a new GE state-of-the-art Cath-Lab first of its kind in North India beyond New Delhi. It is a hybrid lab that caters to interventional cardiology, neurology, radiology, oncology, and gastroenterology. Excellent imaging quality coupled with less radiation scatter to the patient and the operating team is the hallmark of this lab. It has opened greater vistas of advanced interventional work. The first five cases done by the intervention doctors including pacing, diagnostic, therapeutic cutaneous interventions have seemed less, increasing the effectiveness and efficiency of patient care by leaps and bounds. The Rotary Hospital Ambala also offers comprehensive treatment for acute stroke including clot lysing (thrombolysis) injections and mechanical removal of clots from the brain vessels( mechanical thrombectomy). The hardware and software complement each other to give a great end result thereby improving safety and efficacy for the patient and the user.